Find out everything you need to know about SAP Business One.

SAP Business One pricing is licensed on a subscription basis which is typically paid annually.

Let us know how many users you need and we'll be in touch to provide a quick, hassle free SAP Business One cost estimate.

SAP Business One is a complete ERP solution for small- and medium-sized businesses. It combines accounting, inventory management, project management, CRM and eCommerce into one powerful package.

This comprehensive guide is your single source for everything you need to know about SAP Business One ERP software. Download our Business One Ebook now.

The SAP Business One / SAP B1 interface gives users a consistent experience across devices, including web, tablet and mobile devices. The platform has been extended in version 10.0 with the release of a web client. Users interact with familiar navigation and forms, and content like contacts and tasks moves more seamlessly between devices and platforms.

SAP Business One user interface is built on and runs on Microsoft SQL server and now also runs on the SAP HANA in-memory platform. It can be deployed on-premises and in the cloud and it can be accessed remotely via a mobile app. As your SAP Business One consultant we can walk you through a user interface experience. 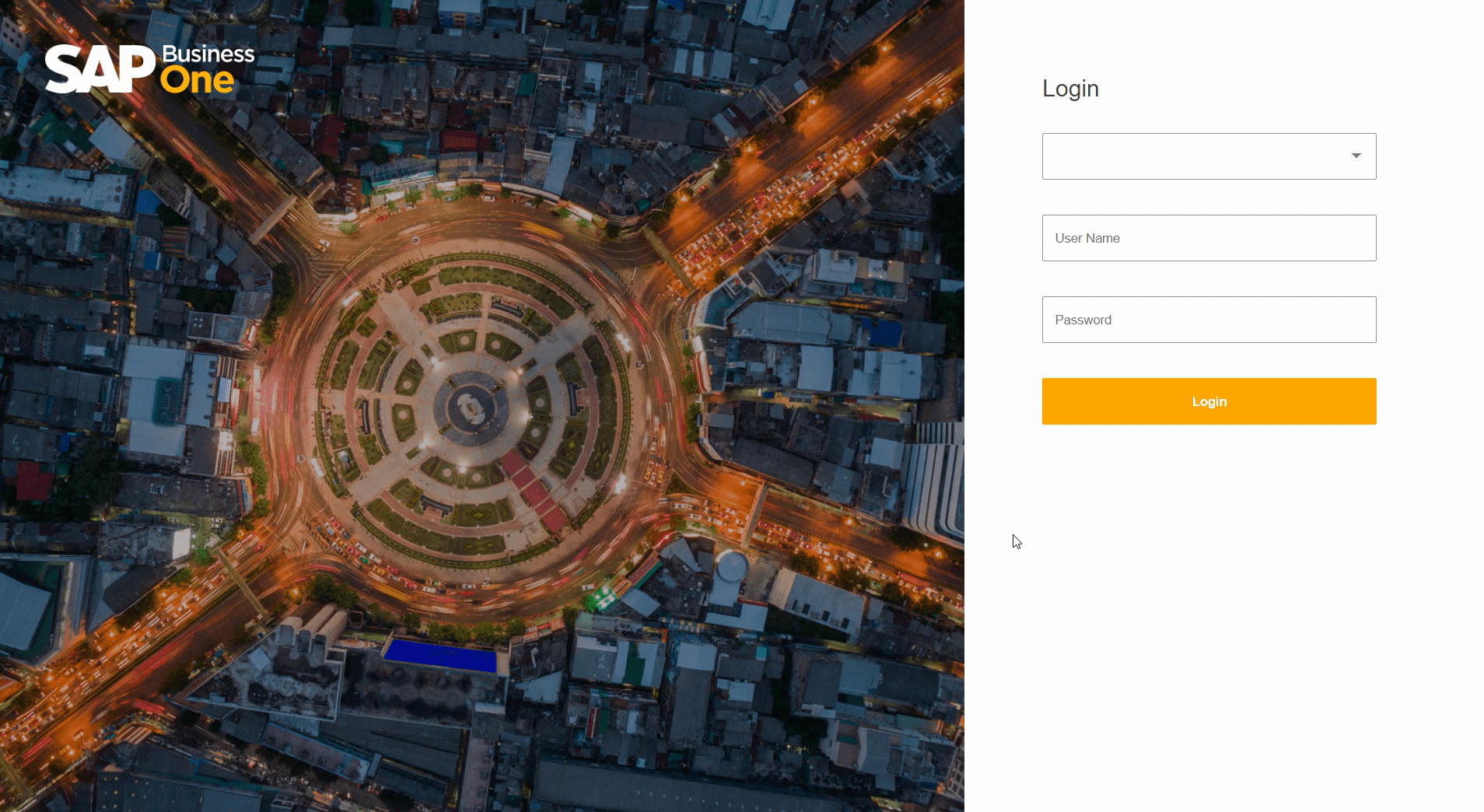 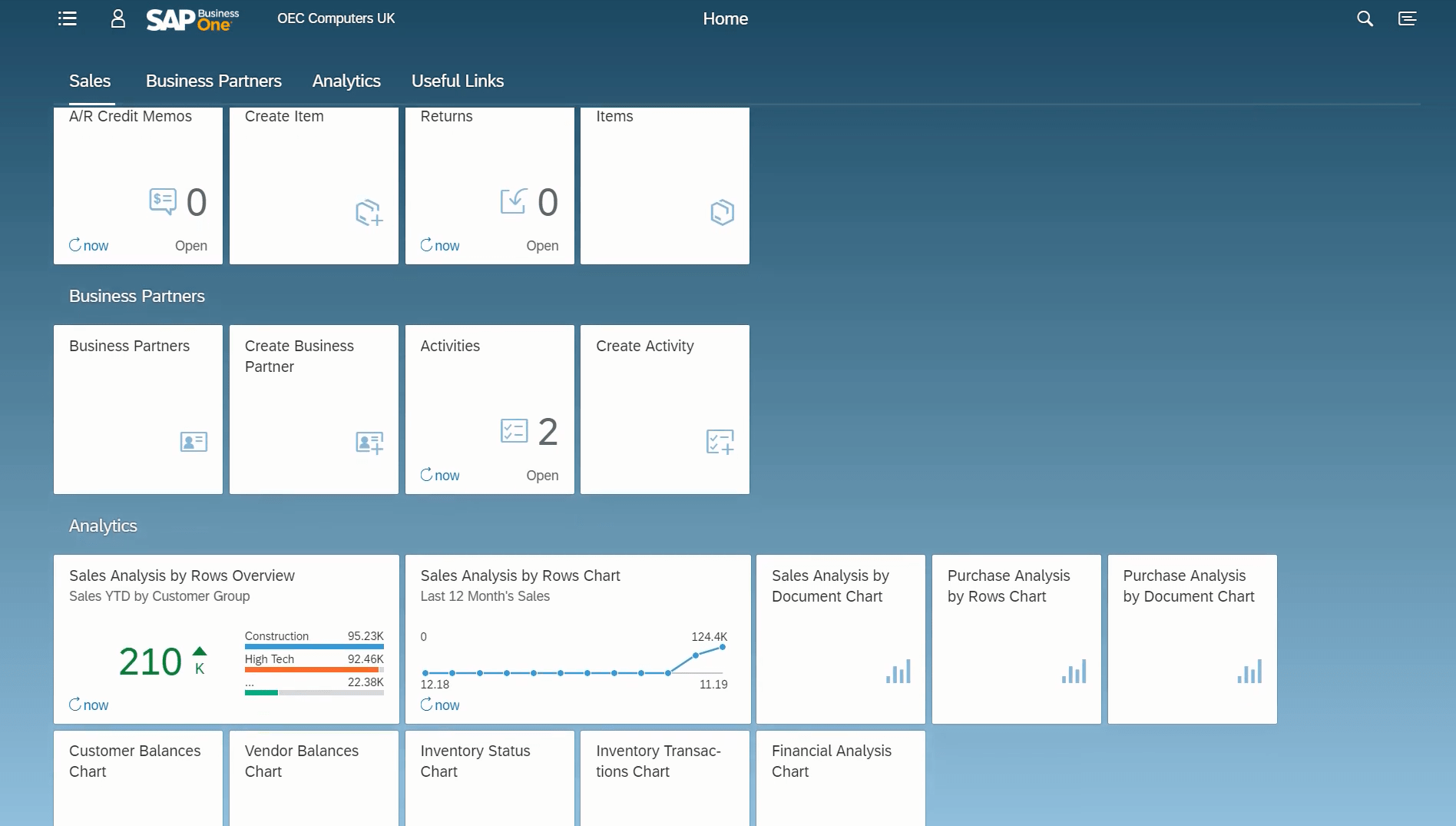 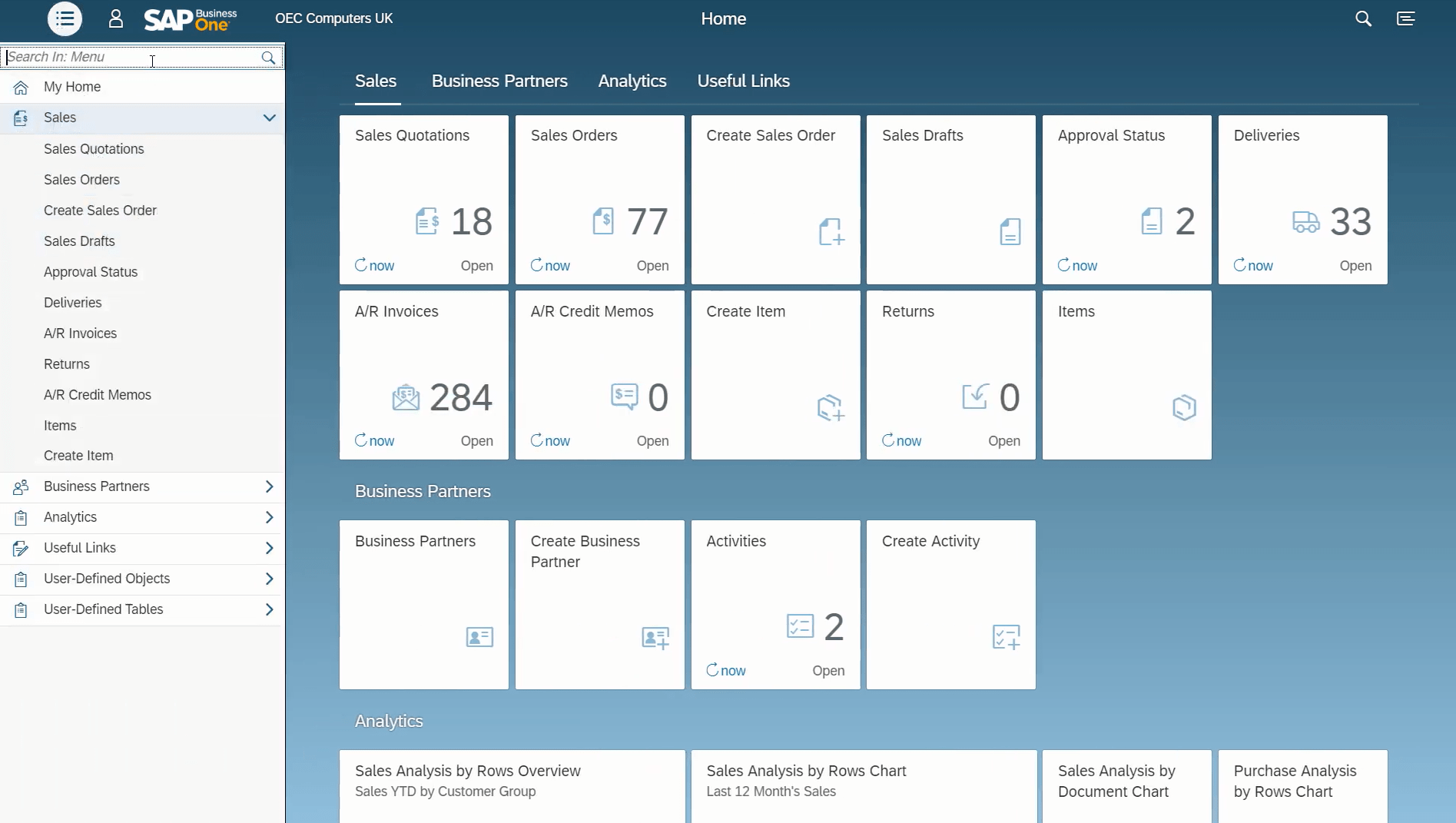 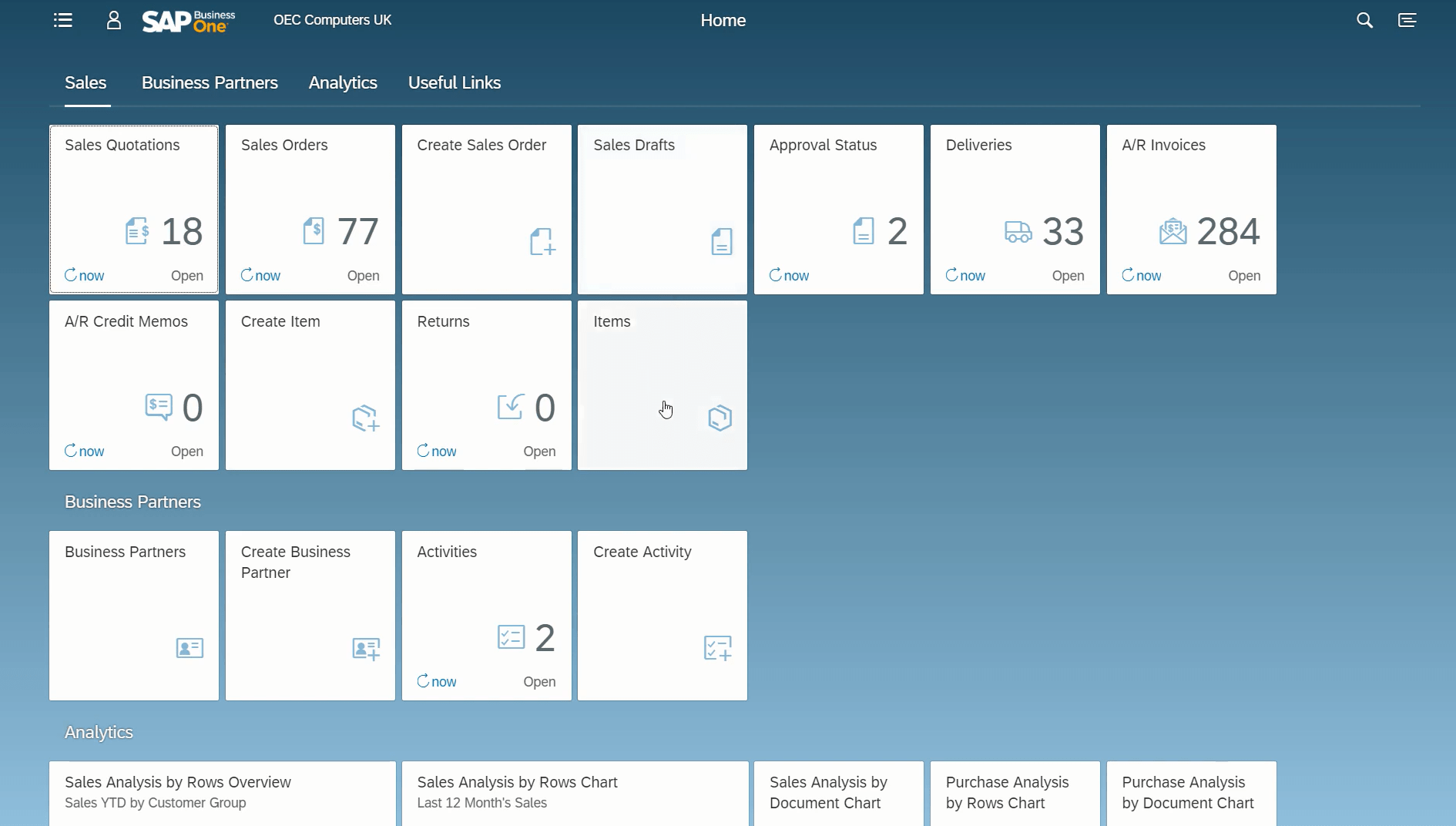 What is SAP Business One / SAP B1?

SAP Business One, also known as SAP B1 is an enterprise resource planning tool from German software house SAP. It was designed to run the back office processes of small businesses (SMB's). Business One offers a wide range of functionality that covers a multitude of business and industry requirements.

B1 runs on both SAP's proprietary database platform, HANA as well as Microsoft SQL depending on the flavour of the software you choose.

SAP Business One is almost exclusively sold via SAP VAR's, also known as value added resellers as opposed to directly through SAP.

SAP Business One offers CRM functionality for end to end lead and opportunity management, marketing campaign management and tracking,  sales order processing and service management including warranties. B1 also natively integrates with Microsoft Outlook to stay on top of customer and prospect communications.

SAP Business One provides several reports as standard and also through reporting customization with extensions such as SAP Lumira & SAP Analytics Cloud for visualization.

Business One has developed over time to provide specific solutions to problems within consumer products, manufacturing, professional services, retail and wholesales distribution organizations.

ERP Research can organize a personalized demonstration of Business One. We'll reach out immediately to schedule your demo.

See how SAP Business One ERP software can help your business to create new efficiencies, hassle free by checking out our Business One reviews or by comparing ERP systems

Organise a personalized demo of SAP Business One with a local certified solution provider suited to your business needs and industry.

Which industries are best suited to Business One and why?

SAP Business One is an ERP solution that technology and consumer product organizations can use to manage core business operations including finance, operations, supply chain, and human capital management.

SAP Business One has a suite of applications that are perfect for high tech & electronics organizations looking for an integrated view of all financial and operational data. As such it provides strong capabilities for billing, revenue recognition and professional services automation. This allows tech businesses to manage the whole quote to cash process as well as project fulfilment.

Align every aspect of your operations to the needs of modern consumers. Anticipate, plan, and manage demand to deliver the consumer goods and products shoppers crave.

SAP Business One offers a lot of functionality that can help retailers and ecommerce businesses including integrated financial management & accounting, warehouse and inventory management, supply chain plus industry solutions for fashion and clothing.

With an integrated eCommerce platform, inventory and sales can easily be maintained in SAP Business One via automatic stock adjustments and reporting.

Then through dedicated customer portals help keep customer data organized with order tracking and claims, allowing customers to download invoices and delivery orders as well as view pending shipments from a single location.

Give consumers the products, information, and personalised experiences they want. Harness real-time customer and point-of-sale insights and optimise operations end to end.

Combining manufacturing expertise, micro-vertical functionality, and modern technologies, our solutions help industrial organizations of any size transform even the most complex manufacturing processes into a competitive advantage. What is manufacturing ERP?

LEARN MORE GET PRICING
SAP Business One / SAP B1

SAP Business One (SAP B1) is a product which is sold and implemented primarily through SAP Value Added Resellers (VARs) and these partners have also contributed to the products development over the years, by developing a whole host of third party solution extensions.

These extensions increase the capabilities of the core SAP Business One product to enable it to provide enhanced functionality for different industries, geographies and use cases. However, be aware that this functionality is not always 100% supported or mandated by SAP and fundamentally you are buying software and extensions with the proviso that these partners will continue to support it.

Some of the SAP Business One solution extensions include:

SAP Business One was first created in Israel under the name of 'TopManage' in English or 'Menehal' in 1996 by TopManage Financial Systems, designed to handle the back office needs of small businesses. After proving it's capabilities in the Israeli market, the company executives began to sell TopManage in new markets including Europe and South America from 2000.

At the time, SAP could only offer ERP solutions suiting the needs of large organisations and so in 2002, SAP acquired TopManage, allowing them to provide subsidiaries of their large customers, as well as SMB & SME independents with a cost effective, integrated enterprise resource planning (ERP) solution.

Since 2002, SAP has continued to develop and support the product with various enhancements including software development kits (SDK), single sign on (SSO), Microsoft Office integration and more.

Since the acquisition, SAP has primarily sold SAP Business One (SAP B1) via it's value added reseller network (VAR) ecosystem rather than selling the solution directly. SAP's VAR partners allows them to scale their sales and implementation efforts globally for SAP Business One, localising the products for different markets, plus providing local consultancy and industry expertise.

SAP Business One / SAP B1

SAP Business One (B1) can be deployed in many different ways including via software-as-a-service (SaaS), On-Premise or Private Hosted. SAP delivers the SaaS version, whereas On-Premise can be hosted in your own datacentre or preferred datacentre provider. Many SAP B1 partners will host the solution for you in a Private Hosted scenario.

There are some limitations of functionality and flexibility based on how you choose to deploy SAP Business One (SAP B1) so always clarify this with your chosen SAP value added reseller (VAR).

GET PRICING
SAP Business One / SAP B1

Business One offers a robust range of integrations with third party tools and extensions. These capabilities allow customers that integrate seamless with their own pre-built solutions or third party applications.
These include:

In this section we'll cover the localization packs, languages and support available in SAP Business One (B1) ERP.

SAP claims that Business One software has been deployed in over 40 countries, configured towards local tax standards.

SAP Business One customers with a valid maintenance contract benefit from Launchpad Support:

Start Your SAP Business One Evaluation

Compare and evaluate SAP Business One (B1) as well as other ERP solutions with our free ERP requirements document checklist. Use our free template to build your own ERP functional and non-functional requirement. 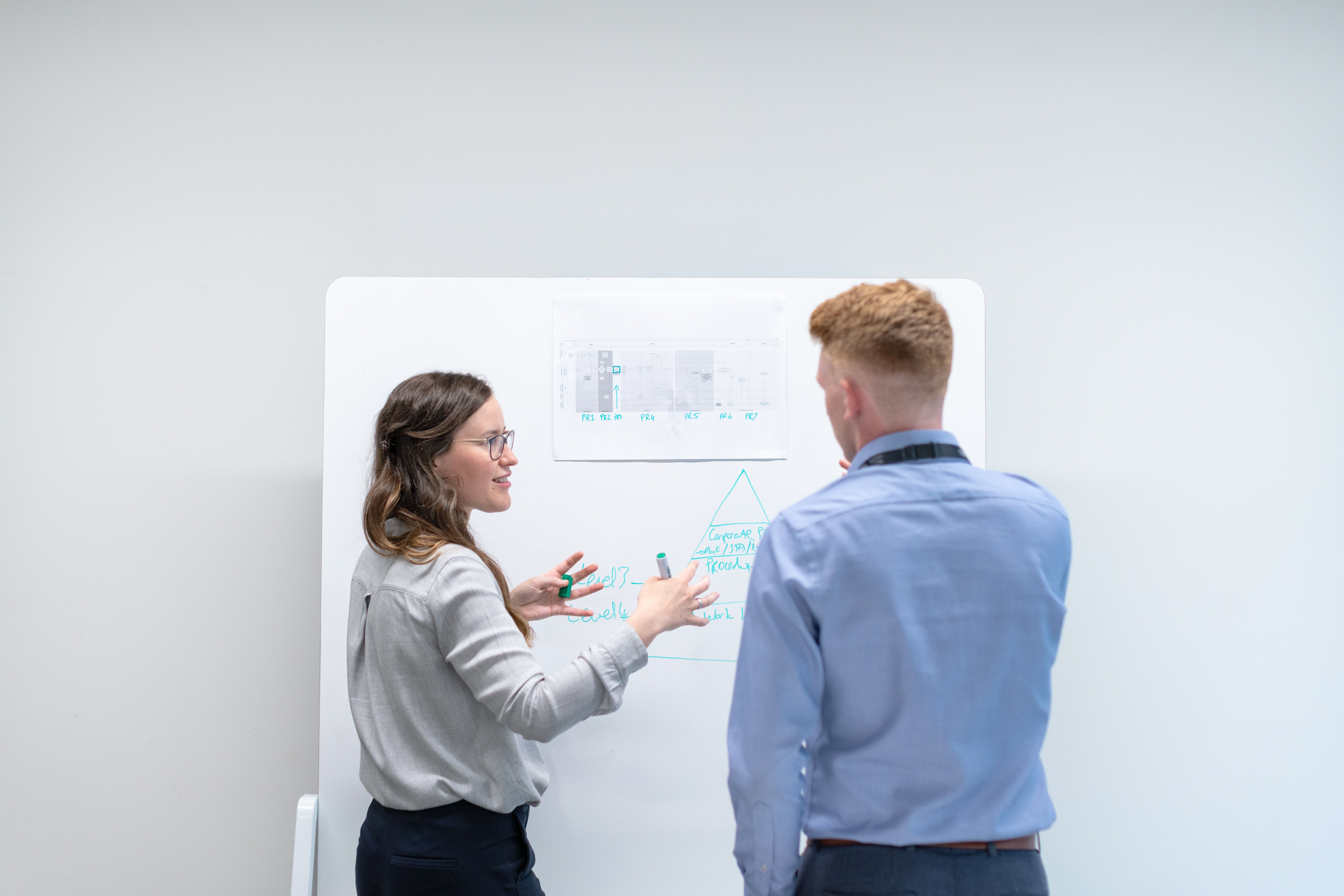 Get 1-1 advice with an ERP Research specialist to help you compare Infor CloudSuite Industrial (Syteline) and select the best ERP solution for your business.

SAP Business One (B1) FAQ

How much does SAP Business One cost?

The cost of implementing SAP Business One will vary from project to project. As with any ERP solution, SAP Business One has it's own set licensing, implementation and support costs. So SAP costings are tailored to suit the requirements of their customers.

The quickest and most accurate way to understand the costs for your business is to contact a specialist software supplier. Get in touch to speak to a member of our team today about SAP B1.

You can contact us for a free demo to explore SAP Business One. If you want to explore the complete functionality and module available. Compare ERP solutions here.

To help you get ready for doing business in Business One / SAP B1, you can download our assisted setup guides, templates or documents for getting your project set up. Get ready for Business One by visiting our resources.

When you are ready to buy Business One, you can request pricing on the Business One pricing page. For more information, see our free ERP advice page.

How do I get technical support for SAP Business One ERP?

As SAP Business One is sold through partners, we can help match you with an implementation partner which will be able to help you with technical problems. If your Business One partner then cannot resolve the problem, they will raise a support ticket with SAP directly for SAP B1.

SAP Business One is sold and implemented through a global network of SAP partners with industry expertise. Contact us today for a detailed assessment, consulting services, and additional pricing.

What licenses do SAP offer?

SAP has two primary licensing models which serve its Cloud & On-Premise customers. Cloud customers typically pay an annual subscription fee inclusive of software, hosting, upgrades and basic support. On-Premise Business One customers however typically pay higher upfront costs for licensing which are then depreciated over 5-10 years, or the lifecycle of the solution.

Get a quick, hassle free cost estimate for Business One software licensing and implementation for your business.

Is SAP Business One suitable for small businesses (SMB) & SME's?

SAP Business One was purpose built to meet the specific needs of small businesses (SMB) and small to medium enterprises (SME) organisations. SAP B1's customer base ranges from organisations with as few as 5 employees, up to several thousand.

Is SAP Business One Cloud based?

SAP B1 was developed originally as an On-Premise or perpetual license solution in 1996.

Today, SAP Business One is still available On-Premise but also as a software as a service (SaaS) solution or as a Private Hosted solution ERP.

How do I install or implement SAP Business One?

SAP Business One is primarily implemented by SAP's value added reseller network and therefore it's generally not recommended that you try to install the solution yourself.